I’m showing my age a bit with this one, but the first toy I remember having when I was a kid was the loveable doll known as My Buddy. This doll was made by the Hasbro Corporation in 1985 and it was basically a doll marketed toward little boys to promote friendship and sharing. Before the Tickle-Me-Elmo or Harry Potter craze there was My Buddy. It even had a cute little song for the commercial. I loved this doll and I took it everywhere that I went. I was happy for the next three years.

Those were the halcyon days.

In 1988 MGM released a horror film, Child’s Play. This horrible, nightmare-spawning, celluloid, 87-minute torture session was about a serial killer who puts his soul into the body of, you guessed it, a My Buddy doll named Chucky. Unsurprisingly, Chucky comes to life and proceeds to plunge sharp implements into the necks and chest cavities of scores of hapless victims. The scariest part is that when it’s done stabbing the life out of people it just lies still and pretends to be a doll, thus avoiding discovery… f*&#ing horrifying. Look at the My Buddy doll and then look at that monster in the film and tell me that the similarity is not on purpose.

Now this is bad enough on its own, but my mom was a terrible parent and she took me to see Child’s Play at the local movie theater. I was five. Who takes a five-year-old to watch an “R” rated movie? Worse yet, who sells this woman and her five-year-old child two tickets for this movie? At any rate, I saw the movie start to finish and it decimated my childhood. Looking back, it was like taking my mental well-being and shooting it in the face at point-blank-range with a shotgun loaded with nightmares.

I didn’t want to go home. I knew that doll would be there… waiting for me.

I would walk inside my room and it wouldn’t be where I left it. It would have animated and hidden itself because it would know that I was on to it.

It would ambush me and stab me to death with a screwdriver. 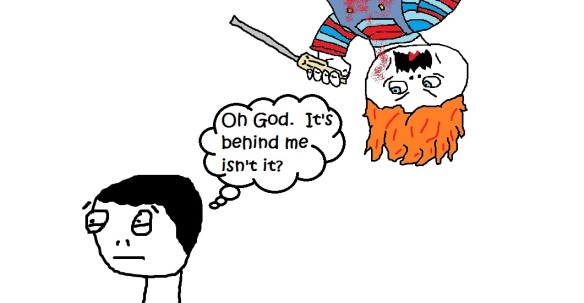 I had to do something. Mom clearly wasn’t going to help, so it was up to me.

I mustered all the courage a five-year-old could and burst through my door. I threw a blanket over the doll like I was netting a wild animal. To this day I remember it kicking and writhing under that orange, woolen blanket. I opened the closet and threw it inside. I put half of the furniture from my room in front of the closet and trapped the doll inside.

I knew that the closet was now dead to me.

Over the next week, my dreams were filled with terror and I awoke to check on the closet fortifications multiple times a night.

The closet barricade had held and I hadn’t been stabbed to death yet, so I began to relax a little.

Then my cousin came to visit. My cousin was about ten years older than me and had the emotional capacity and moral aptitude of Ted Bundy.

I awoke one morning to find the furniture moved and the closet open. The doll was sitting there… staring holes into me with its beady little eyes.

I screamed for three solid minutes.

Grandma finally calmed me down and then she proceeded to scold my cousin.

I put the doll back in the closet (it was safe with other people watching and in the daylight) and I reset the barricade.

Three days later I woke up with the closet open, the furniture moved and this time the doll was in the bed with me.

I screamed, but I’m not sure for how long. I blacked out with fear and I don’t remember my cousin coming to visit us ever again.

I didn’t see The Godfather until years later, but I still don’t think that if I had I would have found my cousin’s allusion to the horse head scene amusing.

P.P.S. I go to therapy only twice a week now.

41 thoughts on “How a Toy Ruined My Childhood”