I was going through my weekday afternoon routine of excessive drinking and playing Rockband (TM) when I looked at one of my cats and I came to a conclusion…  I hate this damn cat.  As if hearing my thoughts the cat, Skittles, who was named by a three year old child, turned and looked directly at me.  This is a considerable effort for this cat considering she weighs in excess of 20lbs and has the physical activity level of a deep sea slug. 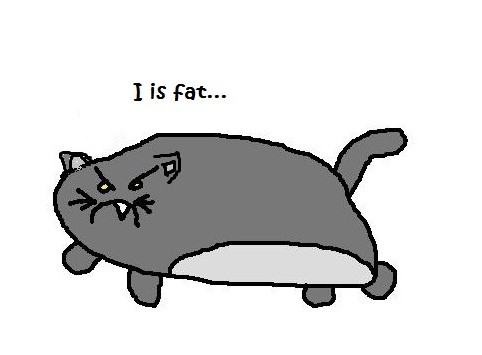 I stopped my fake guitar thrashing.  I stared at the cat in raw disbelief and came to an irrefutable truth.  I had owned this damn thing for three years and it had done absolutely nothing except cost time, money and patience; all things that I have in short supply.  The cat was mean, it was constantly shedding, it farted and when it felt like it, clawed the shit out of me.  I decided that I needed to get rid of Skittles.  First thing in the morning, she was going to be released into the wild where Mother Nature would decide her fate.  Unbeknownst to me, the cat somehow realized that something was amiss.

This put the cat into a depressive state.  About ten minutes later, my wife lets the cat onto our 2nd story balcony.  She had to come in to answer the phone.  As she passes me, she tells me jokingly;

WIFE: Watch the cat.  Make sure she doesn’t jump.

She walks by and I turn to look out onto the balcony and I see this.

Skittles leaps off the balcony.  I tell my wife.

ME: Uh, the cat just jumped.

ME: That doesn’t change the fact that our fat fucking cat just committed suicide.

We go to look over the edge and I start thinking about how I’ll just bury the cat in our garden and I won’t have to deal with her anymore.  It’s cruel, but the cat problem just solved itself.  I look over the balcony railing and find something different.

Our cat had somehow broken the laws of physics and propelled her fat ass with such velocity that she cleared the driveway altogether.  She was now in the neighbor’s yard apparently just as surprised as to how she got there as I was.  The cat locked eyes with me and bolted off.  I turned to my wife.

ME:  Well, at least she’s alright.

ME: Well we just don’t let her back in.  She’s now a neighborhood cat.

We continued on with our night, content that our cat was not only alive, but having wonderful adventures in the neighborhood and we didn’t have to let her back in the house.  Our doorbell rings and I answer the door.  There’s a little German girl standing there with our cat who had apparently clawed the shit out of her trying to get away.  The cat, however, seemed pleased that she was coming back against my will.  I don’t understand much German so this is what I hear.

The cat was clearly taunting me.  Skittles seemed to know that I couldn’t tell the little girl that I didn’t want to own a cat, especially a cat as terrible as this one was.  I smiled and took the cat from her.  I felt a little piece of me die inside.  I closed the door and set the cat down.  It looked up at me in triumph.

I fucking hate this cat.